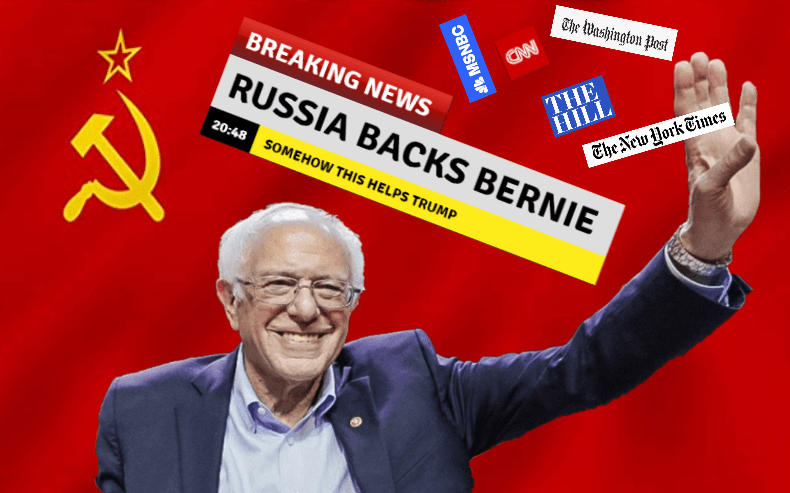 Quake with fear, ye consumer of Cable News. The Great Enemy has risen, emerging once more from their shadowy hive within the tubes to wreak havoc on our sacred democratic elections.

Like Palpatine and his inexplicable resurrection, the Russian Menace is back and ready to fuck up another election, this time in support of … *checks notes* … Bernie Sanders?

Nope, sorry, let me clarify. The Russians are helping Bernie, but only as a proxy to actually help Trump. A stunning development, to say the least. Just when we thought those Soviet bastards couldn’t stoop any lower, they unfurl their most malicious manipulation yet.

Or something. According to the Washington Post, who first broke the story, “It remains unclear how Russia is attempting to help Sanders.” Truly harrowing stuff. Someone refresh my memory, who owns WaPo again?

Sorry, that sounded a little conspiratorial, didn’t it? I don’t want to come off like some sort of manic Bernie Bro, okay? Besides, we did completely seriously endorse Mike Bloomberg the other day, so you know that the staff here can be reliably counted on to shamelessly forward whatever establishment propaganda our billionaire overlords feed us.

Still, the timing is a little suspect, what with Bernie seemingly about to run buckwild in Nevada, and a wave of articles with headlines like “Rivals worry Sanders building insurmountable Super Tuesday lead.” Surely the DNC – having utterly failed thus far to subvert the will of the people – would not resort to the spread of such obvious Red Herrings in a desperate attempt to derail Sanders. Right?

The big polling nugget this week, besides Sanders leading in all of them, was that he is currently the only Democratic candidate who would beat Trump straight up. Given this information, one might wonder why those devious Russians would decide to help Bernie if their ultimate goal is more Trump. Maybe Putin knows something we don’t. Maybe he is exclusively targeting the former CEO of Goldman Sachs.

Who can say for sure? Elections are a complicated thing. Gone are the simple days of people casting votes and then those votes being tallied to determine the winner. The Republicans have long advocated for a sharp turn away from this archaic system of representation. The Democrats appear to be following suite. During the debate on Wednesday, five of the six candidates admitted that the person who enters the Democratic National Convention with the most delegates should not necessarily become the nominee.

Only one of the candidates on stage reaffirmed their belief in this extremely basic tenet of democracy. I will let you guess who that was.

Curiously, NBC decided to omit this bit of tape when uploading the debate to YouTube. But surely, as was the case with their reporting on the Russian Resurgence, the media would never try to mislead us. Right?