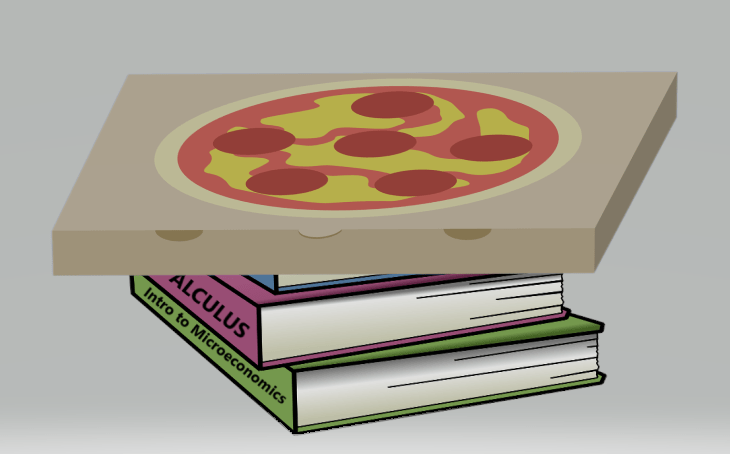 Pizza delivery is a lonely endeavor. There is a sadness in her eyes as Katie slides the hot bag onto the passenger seat of her white Ford Focus. The sun has already set and the only light around is cast from a single street lamp hovering over the parking lot of the Papa John’s. The car starts, and the melancholy crooning of Lana Del Rey resumes through the aux cord. She lights a cigarette and peels out onto an empty road.

Some job. Her last two deliveries both stiffed her, compounding an already shitty night. If she had known Anderson was going to be so stingy with their tips, she could’ve called out and studied instead. Another huge calculus test was looming and she couldn’t afford to fail. Not from a grade-point perspective, and certainly not from a financial perspective.

She shudders at the thought of checking her balances. There is no discount for retaking a class. No one at the bank cared about how she kept getting called into work the night before her exams. The sign propped up next to the register said “NO REFUNDS.”

Her delivery is to one of the many complexes that service the Clemson student body; this one a set of pastel townhomes called The Orchard. Cars are crowded out front of the address and the heavy drumming of a powerful subwoofer thunders from within. She sighs, shifting the car into park and reaching for the hot bag. She hates delivering to parties.

A pair of girls are camped out on the porch, obviously drunk and waiting for their pizza. They are her age and wearing similar black dresses; most likely sorority girls partying after formal. They smile eagerly at the slight of the glowing Papa John’s topper affixed to the roof of her car.

“Pizza!” one of them squeals.

“Oh my God, finally!” says the other.

“Sooo hungry,” groans one of the girls. “This is already paid for, right?”

Katie checks the receipt, even though she doesn’t need to. “It’s actually a cash order.”

A few moments later a tall blonde kid in a white oxford and his tie loosened comes staggering onto the porch. The smell of sweat and marijuana follows his movements. Flashing LED strobe lights illuminate the windows, and the music has shifted from EDM to Billie Eilish.

“Sup?” he says, creepily scanning over Katie. “You want a beer?”

“Lame.” He takes a long swig from the Natural Light in his hand, crushes the can, and tosses onto the ground. “You sure? One beer won’t hurt.”

“Michael, just pay for the pizza,” snaps one of the girls.

“Alright, sheesh.” He flashes his well-organized teeth as he roots around the pockets of his dress pants. “Aw shit, I think I left my money in my room. You want to just come inside real quick?”

“Michael, we are hungry!” cries the other girl. “Please, just pay her.”

“Fineeee.” He produces a twenty and hands it to Katie. “Is that enough?”

She checks the receipt again. The order is for $19.50. “Yeah, you’re good.” She hands him the pizza and then hurries to her car, eager to get back to the store. It was a little after midnight, and her manager had promised that if things stayed slow, she would be first out. Should that be the case, it would leave her with a few precious hours of study time before sleep forced her down for the night.

She arrives at the store to find the night manager underwater. All three phones are ringing, the delivery screen has more than thirty orders pending, and a stack of boxes is waiting for her under the heat lamps.

“I’m sorry,” says her manager. “But we are getting fucked.”

She says nothing, slides the orders into her hot bag, and sets back off into the night. Instead of music, she plays a Khan Academy video about derivative rules over the aux cord, but his voice starts to lull her to sleep and she switches to Death Grips after her drooping eyelids almost cause her to veer off the road. Her route is on the outskirts of their delivery range, and it takes her nearly thirty minutes to reach the first address.

She pulls into a trailer park. There are no lights except for her high beams, which she switches on and angles towards the door of her delivery. The shadow of dead trees creep up around her, and empty beer bottles and cigarette butts cover the ground. No one answers when she knocks, and just as she decides to move onto to her next address, some shuffling beyond the plastic door causes her to reconsider.

The door creaks open to reveal a large, muscular man standing in the doorway. He hands her exact change, takes the pizza, and then closes the door without a word.

Another stiff. Good thing her rent was already covered for the month, although groceries might be a little tricky next week. She’d already come to terms with the fact that she wasn’t going to make the interest payment on her loans, but that was something she could worry about later. The trick was to not answer any calls from unknown numbers, which had been steadily increasing to about twenty times a day.

Sometimes she wondered if those trade-offs would be worth it in the long run, but graduating by the skin of her teeth seemed like a better option than dropping out due to homelessness.

Mom and Dad wanted to help, but the money just wasn’t there. Her first year at school, she applied for aid as a dependent applicant and got nothing in return. The bank checked the tax records and that was that – all they cared about was income. They didn’t care that her parents were already paying for her brother’s expensive rehab. They didn’t care that Grandma was in a nursing home with medical bills that far outstripped her coverage. They didn’t care that a hurricane had walloped the family home, sending a tree through the living room to the tune of almost $20,000 in damage.

The following year, Katie applied for financial aid as an independent borrower and received $5,000 in Pell Grants. The rest of her tuition – just over $19,000 for the year – was offered to her with loans, including the option to borrow even more to cover her other living expenses.

Her next delivery is to one of the nicer neighborhoods; a maze of sprawling brick homes and wide, well-lit streets. She is surprised by the timing – these addresses rarely order delivery this late, but then pizza cravings can strike at any time and without warning.

A middle aged woman opens the door before she can knock. “Thank you for coming this late,” she says softly, scribbling on the receipt. “Are you a student?”

“I’m surprised they still have you out on the road.”

“As long as people are placing orders, we’ll be out here.”

The woman hands back the receipt. There is a ten dollar tip. “Thanks, and good luck.”

Katie climbs back into her Focus and stares at the receipt for a minute before pulling out of the driveway. That one tip will make up for her last few deliveries low-balling her, but somehow she doesn’t feel relieved. Instead, she encounters the same mixed emotions as when the bank offers her more loan money… Some numbers to keep her afloat for now, only to fuck her up later. Another trade-off with a dubious balance.

She crumples up the receipt and hurls it out the window, then immediately regrets doing so. Pulling the car over, she uses her phone as a flashlight to search the damp grass for her $10 piece of litter. It’s after one in the morning when she finally finds the crumpled up strip of paper, wet but still legible. Exhausted, she starts the car back up and lights a cigarette, crushing the menthol bead and feeling her nerves relax. Another delivery awaits.